It all started with the Apple I

In 1970 Steve Jobs had a summer job where he became friends with Stephen Wozniak. Both were members of the Homebrew Computer Club. As a hobby, Wozniak manufactured microcomputers. Jobs saw Wozniak’s invention and convinced Wozniak that together they could manufacture and sell personal computers (PCs). (Strategies of Apple Inc.)

Jobs saw Wozniak’s invention and saw opportunity.  To them the idea of building and selling personal computers was a compelling one, but to most people at the time it was ridiculous concept. Wozniak was so passionate and committed that he dropped out of University of California in Berkeley to focus on their shared vision and passion.

The two toiled together to bring their first product, the Apple 1, to market. Wozniak had been designing over a period of years. It was similar to the first commercially available computer – the Altair 8800. It was developed for computer hobbyists and was a simple machine. They debuted Apple 1 on April 1976 at the Homebrew Computer Club in Palo Alto. Few took it seriously. It was sold through several small retailers and its initial cost was $666.66. (Strategies of Apple Inc.)

In January 3, 1977 they were officially incorporated as Apple Computer Inc. Stephen and Steve worked out of Jobs’ garage. They toiled together to bring the Apple 1, and sold them at $666 dollars each. The Apple 1 actually had been designed over a period of years by Stephen Wozniak and was similar to the first commercially available computer – the Altair 8800.   It was developed for computer hobbyists and was a simple machine.

The strategy development and planning process can be tide to review previous targets, identify key reasons for gaps, and to set new performance goals. A key is to pay the price to develop sound performance indicators, to monitor progress regularly and to continually address issues so that the targets can be achieved.

Internal and external indicators should be in place. Internal indicators help to monitor those critical activities needed to achieve the targets. External indicators monitor factors outside of your organization that could impact your short and long-term goals. The ideal is to find factors that provide you the greatest lead time and are most reliable.

Passion and sweat was put into the Apple II. Stephen and Steve needed and wanted to make a splash. They redesigned the TV interface computer, included graphics and eventually color. They improved the case and the keyboard. It was designed so that that the computer was ready to run out of the box. They debuted the computer at the West Coast Computer Fair on April 16, 1976. Sales for 1977 totaled $774K.

The Apple II was impressive and the most inexpensive personal computer at the time. It differed from the competitor products, the TRS-80 and Commodore PET, because of the color graphics and open architecture. VisiCalc had developed a spreadsheet program, and chose the Apple II to be its desktop platform. Orders took off after three years resulted in $139m in sales. The company invested in hiring computer designers and a production line. (Strategies of Apple Inc.)

Apple Computer Inc. focused on creating the Apple III to compete with IBM and Microsoft in the business arena. In 1980 it was introduced. It included software and was higher priced. Unfortunately, it had stability issues and was recalled, and then reintroduced in the fall of 1981. This product was not successful.

After the Apple III, the company focused on a new product they called “Lisa.” It included a hand-held mouse and a GUI. The product was priced too high keeping it from selling well.

Apple focused on creating a culture that supported innovation, and focused on developing a new computer – the MacIntosh (Mac). It was released in 1984. It included graphics, and Mac OS that could run on all of the Apple computers, was user friendly, and sold at a lower price. It was projected that 80,000 units would sell, but only 20,000 did. Businesses where hesitant to buy the Mac because of its incompatibility with IBM PCs.

John Sculley was president of PepsiCo. He was known for his marketing skills. For instance, he introduced “the Pepsi Challenge” which resulted in PepsiCo gaining market share. In 1983, he was hired as CEO of Apple.

John Sculley Board members were not happy about the cost of the Mac initiative. In 1985, the CEO John Sculley and Steve Jobs struggled getting along. They had diverging philosophies and visions. The Board had directed that John manage Steve Jobs and his expensive initiatives. Ultimately, this resulted in Steve attempting to oust John Schulley from his position. A board meeting was called, the Board sided with John Schulley, and Jobs resigned. (Strategies of Apple Inc.)

Steve was distraught for several months. His public failure made him want to run away with his family. Eventually, he reconfirmed to himself what he loved to do most, and decided to start over. He said, “but something slowly began to dawn on me – I still loved what I did. I had been rejected, but I was still in love. And so I decided to start over.”

NeXT moved into the software development world and released NeXTSTEP in 1989. It was an object-oriented, multitasking operating system that ran on NeXT computers. Examples of the advanced features it provided included are: considerable power to develop software; refined user interfaces; GUI concepts not common in other operating systems; drap and drop of objects beyond file icons; real-time scrolling and window dragging; interfaces to manage publishing color stands; sophisticated sound processing; internationalization; modern typography.

Steve was distraught for several months. His public failure made him want to run away with his family. Eventually, he reconfirmed to himself what he loved to do most, and decided to start over. He said, “but something slowly began to dawn on me – I still loved what I did. I had been rejected, but I was still in love. And so I decided to start over.”

NeXT moved into the software development world and released NeXTSTEP in 1989. It was an object-oriented, multitasking operating system that ran on NeXT computers. Examples of the advanced features it provided included are: considerable power to develop software; refined user interfaces; GUI concepts not common in other operating systems; drap and drop of objects beyond file icons; real-time scrolling and window dragging; interfaces to manage publishing color stands; sophisticated sound processing; internationalization; modern typography. (Strategies of Apple Inc.)

From 1986 to 1993, key products that Apple released included the Macintosh computers, portables, powerbooks and workgroup servers. Skulley focused on mass marketing and sales increased from $800 million to $8 billion. It seemed that nothing could go wrong for Apple.

Apple started to move away from their core strengths. John Sculley began to create too many categories of products that lead to confusion. Each product model had a different name targeted for different markets (e.g., home, education, and business). Buyers were confused. There were eventually incompatibilities between various models. Trying to keep the operating system compatible across the models was daunting. Apple also focused on cameras, CD players, TVs, speakers and other non-computer related products.

In the meantime, Microsoft focused in on dominating the lower end computer market with Windows and consumer software. Apple responded by trying to sue them for using a graphic technology similar to theirs. The lawsuit went on for years, was finally dismissed, and ended up hurting Apple’s reputation. Strategies of Apple Inc

Michael Spindler was promoted to CEO in 1993. He had played a key role in helping Apple to grew quickly in Europe. He was a brilliant strategist. He launched several successful projects that turned out to be successful (e.g. PowerPC) but also had some big failures. While Spindler was a great strategist, he wasn’t as gifted at translating his strategies into concrete plans and struggled with stress. He held discussions with IBM and others about takeover options, and when these didn’t materialize, he was let go.

In 1996, Michael Spindler was replaced by Gil Amelio. Gil was the former CEO of National Semiconductor where he cut costs and returned the company to profitability. His focus at Apple was to improve cash and liquidity, return the focus to high quality products, develop a success operating system plan, created a disciplined culture, and develop and implement a clear strategy.  (Strategies of Apple Inc.)

Amelio reduced the workforce by 1/3, and focused on the development of the Mac OS 8. Apple still needed a viable next generation operating system. He launched talks to purchase BeOS but they never reached an agreement. Ultimately, Amelio started discussions with Steve Jobs about NeXT and in 1997 bought the firm for $429 million.

Steve Jobs was concerned that cost-cutting approach of Amelio would not sustain Apple. He argued that the cure for Apple was not in cost-cutting, but in innovation. Later in 1997, Amelio was let go. (Strategies of Apple Inc.) 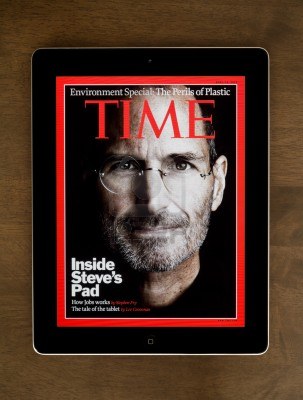 August 2004 – Jobs announces he underwent successful surgery to remove a cancerous tumor from his pancreas. The rare form of cancer is highly treatable.

2005 – The iPod adds video, and Apple fills out its portable media line with the low-end iPod shuffle, and sleek iPod nano.

January 2007 - Apple announces the iPhone. The device features one button on its smooth face and a virtual keyboard. It also introduces Apple TV, which attracts few buyers.

September 2007 - Apple unveils the iPod Touch — essentially an iPhone without the phone — which has wireless capabilities and performs much like a portable computer.

2008 - Apple opens its App Store as an update to iTunes. The store features small applications — from games to social and business tools — that add functions to the iPhone and iPod Touch. Apple also releases the MacBook Air.

June 2009 - Jobs returns to the company after undergoing a liver transplant.

2009 - Apple releases the iPhone 3GS. The company has sold more than 220 million iPods so far.

2010 – Apple awards Cook a bonus valued at $22 million for leading the company during Jobs’ sixth-month leave, during which its shares soared about 70 percent.

April 2010 - Apple begins selling the iPad, a 10-inch touchscreen tablet, and has an 84 percent share of the tablet market by year’s end. Researcher iSuppli estimates 12.9 million iPads were shipped as of December 10.

January 17, 2011 - Jobs announces that he will take another medical leave.

February 10, 2011 - Verizon Wireless, a venture of Verizon Communications Inc and Vodafone Group Plc, starts selling the iPhone in stores and puts an end to AT&T’s exclusive contract for the phone in the United States.

February 15, 2011 - Apple launches a long-awaited subscription service for magazines, newspapers, videos and music — a move that could hurt streaming services Netflix and Hulu.

March 2, 2011 - Apple launches the iPad 2, a sleeker, lighter version of its tablet with a new dual-core processor, two cameras and, for the first time, it comes in either white or black. (Apple Inc. Strategies)